Ubuntu Software Center (previously called Ubuntu Software Store, originally codenamed AppCenter) is a computer program which is a GTK+ graphical user interface front-end to the Advanced Packaging Tool for the Debian package management system. It can be used to install and remove software packages and to add repositories. 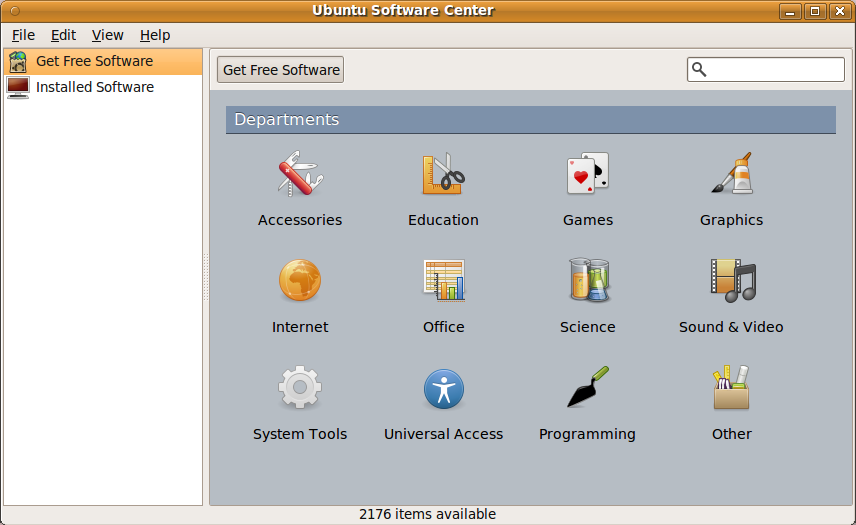 The Ubuntu Software Center is a graphical utility for package management in Ubuntu. In version 1, it will build on the basic philosophy of Add/Remove Applications and make it even easier to use. In later versions, it will grow to replace Synaptic, gdebi, some parts of the Computer Janitor, and possibly Update Manager; and in version 3, it will offer commercial software. Having a single interface will make handling software easier, socially improve security, hopefully free space on the CD, and provide a prominent showcase for Ubuntu and partner software. The Center is implemented using Python, GTK, and Aptdaemon, and may use PackageKit for some components.

The aim is to introduce the Software Center gradually starting with Ubuntu 9.10 Karmic Koala with more complete functionality expected by Ubuntu 11.04, in April 2011. The plan is to introduce changes as follows:

October 2009 – Ubuntu 9.10 Karmic Koala
Introduce a new simple interface for locating, installing, and removing software, with better security based on PolicyKit instead of gksudo.
April 2010 – Ubuntu 10.04 Lucid Lynx
The Software Center will replace Synaptic, Software Sources, Gdebi, and possibly the Update Manager. This will include finding, installing, and uninstalling non-graphical software such as utilities, fonts and database software. A system will be included using Launchpad to allow interactive software ratings and reviews.
October 2010 – Ubuntu 10.10
Integration of the ratings and review system from Launchpad into the Software Store, including the ability to purchase software.
April 2011 – Ubuntu 11.04
Improve sharing and tracking of software within the Store, to allow lists of installed software by parameters such as license, cost, or maintenance timetable. Allow users to find software by seeing what their friends have installed and also downloading a package once for deployment on several computers. There will also be a history feature that will indicate past software installations, removals and purchases, which will allow specific changes to be undone. At this stage the application should allow finding and installing specialized packages, including fonts and screensavers

The Ubuntu Software Store application is now present and it is available under the System menu. Its appearance has been greatly improved for an easy usage, but the basic software installation, search and removal functions remain.